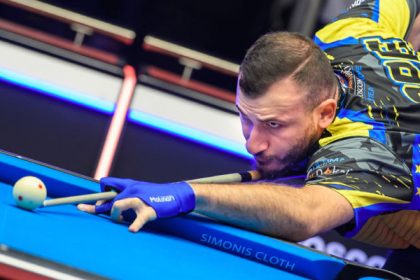 How long have you been playing pool? Have you quit the game at all during these years?
I’ve been playing since I was 15. From when I started I never quit.

What is the biggest field you have beaten in a tournament?
Last october’s Eurotour I beat a field of about 220 players

Biggest titles you have? Any Pro titles?
I won 2 Eurotours between 2018-2019.
I’m also an European 10-Ball Champion (2015).
I won the Kremlin Cup (2016) My biggest win.
But the best feeling was winning the Eurotour, because it also gave me the points I needed to earn a spot in the Mosconi Cup.

What is the tournament you most regret not winning (I think I know the answer to this one…)?
If you consider Mosconi Cup a tournament, I would have to say my first Mosconi Cup in 2018.
My last match with SVB I was brain dead. Never felt that bad before, my head wasn’t right, and I felt I let down my team because we were down 6-10 and we came back to 9-10.
I couldn’t make that extra point to go into a decider hill-hill Cup.
If you watch the interview I coudn’t stop crying.

As a Singles event the final match of the World Pool Masters against David Alcaide, because I played amazing the whole tournament,making hardly any mistakes, but then in the end the pressure got me and couldn’t get out that last rack.
I made a huge position mistake towards the end and allowed my opponent to the table.

Many people say I should have played the bank on that last 9-Ball, but it wasn’t that easy with the shot clock running out. I didn’t have much time to think what the right shot was, and thought at the time that playing the bank in a rush was easy to miss.
I don’t regret having played safe in that spot. I believe I played the right shot under the circumstances. Then David made a hell of a bank to win.

My mistake that last rack wasn’t the 9-Ball, but the bad position I got on the 7 ball, that forced me to bank it in and then landing in a bit an uncomfortable position on the 8 ball.

If I did not have a shot clock running out of time on that 9 Ball, I would have probably gone for the bank.

You have beaten most of the strongest players in competition, but who are the ones you are most proud of beating, and why?
And best players who you have never beaten in competition?
I’m proud everytime I beat a world class player. In the end of the day I just do my job and play as best I can to win.
I don’t think I need to beat a certain player to feel prouder.
I feel proud of myself winning big tournaments

I can’t remember all the players I have beaten, but I’m pretty sure I have beaten everyone in the world’s Top 32, at least once, except for the ones I have never played against

Strongest player that you have beaten in one on one money game/exhibition?
SVB came to Greece once and I beat him 2 sets of 9-Ball  races to 17 for 250€ a set.

Biggest amount of money you have won in one night?
Around 1500€

Biggest amount of money you have played for?
$USD 14,000 10-Ball best of 3 sets races to 17
Playing Oscar Dominguez

Biggest amount of money you have won in one tournament?
$USD 13,000, when I took 2nd place at the World Pool Masters

How many tournaments have you won that paid USD$1,000 or more for first place (approx.)?
About 30, most of them in Greece

Do you like playing the 9-Ball game?
What 9-Ball format/rules do you like best?
Would you prefer playing 10-Ball instead?
I really enjoy playing 9-Ball.
My favorite rules are: 9 Ball on the spot, template, break from anywhere, winner break, races to 11 or longer.
But I would prefer to play 10-Ball

3-Cushion Billiards highest run:
7, I think it was against you!

Who are the players you most admire and why?
Wu Jiaqing is the player I admire the most, because I think he has the ability to play all aspects of the game at the highest level.
Some players have a good break, some others are great shot-makers but don’t play good safeties.
Some players play good defense and come up with clever choices when in tough situations, but they are not as good running out nor breaking the balls.
I think Wu does everything at a really high level, and this is why I admire his game the most

Who do you think is the best rotation player in the world today?
Joshua Filler (playing 9-Ball)
SVB (playing 10-Ball)

Who do you think is the best All Around player in the world today?
Dennis Orcollo

What you can read next 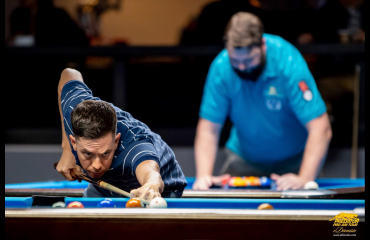 TOP
This website uses cookies to collect information that helps us optimize your user experience. If you continue browsing, we will consider that you accept your use.I agreeNoRead more